As we finish for our Easter break, a couple of points to note for all.

We go again, working together 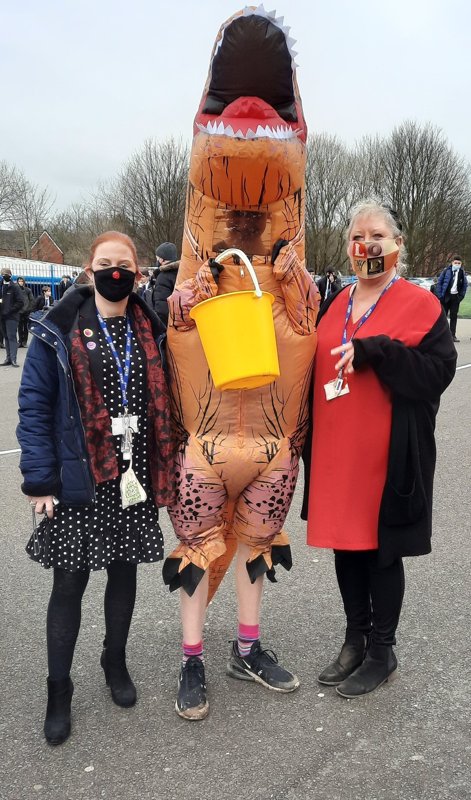 Today our boys have had a focus around Comic Relief.  Led by our own red noses, Miss Fisher and Miss Jedd, boys were able to wear silly socks or even odd socks to school.  During form time a range of quizzes were arranged, to dovetail with presentations.   Sharing experiences and making boys aware of their social responsibilities underpinned many of the messages.  The notion of looking out for each other chimes with the values of the school, and we have a long tradition of active engagement with community support.

Miss Mason was overseeing a virtual bake off, as well as themed dishes for those boys with Food Technology on their timetable.  In addition during their games lesson this morning Y10 coordinated a fun run, with some dressing up, and this did provide a light hearted diversion for the boys from what have been miserable times.

I also had the pleasure this afternoon of being invited by Mrs Robinshaw's Y7 English class to listen to some of their work. They have been writing persuasive letters considering the merits or otherwise of our school uniform.  It was very impressive in terms of the standards produced, as well as the efforts made to articulate their points.  The boys had worked really hard on this task and justifiably took pride in their work.  I was particularly impressed by how supportive the boys were of each other, with a real sense of collaboration in the class.

Overcoming adversity is part of the resilience message we aim to instil in the boys.  Our wider development programme, seeks to build on a recognition that not everything will work out every time.  We stress to the boys the importance to learn from such moments, whether in the classroom or in other settings. It is important to work hard and believe in what you are doing.  We often overlook the importance of simple messages and when we can tap into them.  So I may not be alone this weekend, in hoping to witness further evidence of when by sticking together as a group, not giving up despite criticism from others and against the odds, success can be achieved.  There are often disappointments along the way, but the reward at the end of a journey can often be that bit sweeter, based on the hard work needed to achieve it.